Halki (Chalki or Χάλκη in Greek), is a tiny island 6 km west of Rhodes, with only 28 km2 land area and is the smallest inhabited island of Dodecanese. Its name most probably reflects the copper (χαλκός in Greek) once mined there. It has a permanent population around 350 people which increases at summertime. 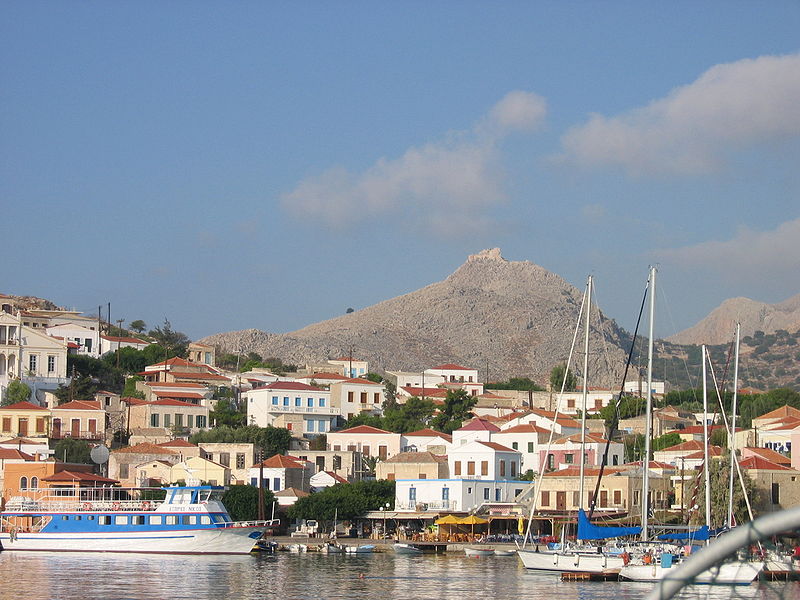 Halki is a small and quiet island, therefore the options are limited. The island is ideal for total relaxation at the beach or in the countryside. As there are not many people, the island’s beaches are secluded so it is ideal for fishing and snorkeling and it is the perfect place for someone who wants absolute relaxation under the sun without city noise and cars passing by.

When the sun goes down people in Halki are gathering at the local seaside taverns for lunch or refreshments and at the evenings at the lounge bars. People usually wander around the alleyways and enjoy delicious smells from the traditional ovens that every house is equipped with in order to bake bread and some local handmade pastas.

Another enjoyable activity in Halki island is hiking. Many old footpaths cross the island and lead to tiny chapels, small settlements, secluded beaches and hilltops with breathtaking view to the sea. Due to the high temperature though, it is advised to make long walks and hiking at “cold” months of the year because walking under the sun might be quiet uncomfortable.

The community is divided in two parts, Chorio (also spelled Horio – the village,  Χωριό in Greek ) and Nimporio (the market, Εμποριό in Greek). The island supported a much larger population but following emigration in the 19th century Chorio was almost completely abandoned and people moved to the other part.

Nimporio area charms its visitors with the traditional architecture, the lovely waterfront and the paved paths. There are a couple of cafeterias and taverns, also few traditional studios with basic facilities for staying your nights. Pontamos is the most popular beach on the island with its sparkling white sand. Also some other beaches available for visit are Kania, Giali, Ftenagia and Areta. Trahia though, a beach between two channels of water, can only be accessed by small boats.

There is a path that leads to the Castle of the Knights, a beautiful monument with strong high walls, which offers magnificent view of the island and the Karpathian sea.

Every 29th of August, the island’s biggest feast, held at the monastery of Ai Giannis Alargas (Saint John Alargas), the whole island celebrates with a memorable passion and everyone is more than welcome to join in. If someone is looking forward for absolute relaxation, Halki is the best destination.

In ancient times, the water situation was a little better than now, the higher water table allowing some wells. The island supported up to 7,000 people, and grew 2 crops of wheat a year, in small stone-enclosed fields. Halki was also a producer of copper, which is supposed to account for its name – from the Greek ‘halkos’ for ‘copper’. Halki was then much allied with Rhodes, eg in the Peloponnesian War of 412BC.

Later centuries saw occupation by successive imperial powers, notably the Arabs in the 7th Century AD and later the Venetians in 1204, which led to the building of the medieval fortresses on the ancient acropolis site in Halki, and on Alimnia. Turkish control began in 1523, lasting until the Greek War of Independence in 1821.

In Medieval and later times, the threat of pirates forced the inhabitants to live far from the sea, up in the mountains at Chorio (a feature repeated on many of the islands throughout Greece). The inconvenience of carrying on a fishing industry while living up the the mountains can only be imagined, though one expects the goat herds found it more congenial.

By the early 19th Century, when the piracy problem had receded, most people had moved down to build their houses in the lovely amphitheatre of Emborio which we know today, leaving the old houses of Chorio to fall into ruin.

However, difficulties with the local industry of sponge fishing, eg high taxes and disease, meant loss of livelihood for many of the 3,000 inhabitants and 50 boats, and led to successive waves of emigration, the greatest in 1911-2 to Tarpon Springs in Florida, where sponge fishing could be continued. It is likely that another imposition of imperial control had something to do with this also. The Italians had assumed control of the Dodecanese in 1911, and later Mussolini in particular had grandiose plans. Halki owes its Post Office and Police Station to the Italian building programme which had such an impact on Rhodes Town. The imposition of Italian schooling also produced many bilingual Greeks.

Further losses, mainly of young people,in the 1950s (usually to the USA) meant that the community was dying – from 3,000 people in the 19th Century to a couple of hundred at most. So, as the population dwindled, the beautiful houses in their special large-windowed Venetian style – influenced by the architecture the sponge fishermen saw in their travels around the Mediterrannean – began to decay.

And of course, it is well to remember that a number of the stone shells are not ruins, but simply unfinished properties which had to abandoned when the owner had to move elsewhere for his livelihood. Their ownership had passed to generations whose lives were based in another country, and the sharing of property among siblings often meant that no one could agree on the fate of their crumbling asset far away. However, no Greek ever forgets his roots. The residents of Tarpon Springs endowed Halki first with money for its stone clock tower, and, more lately, with the money to build the road to the Monastery far up in the mountains – the Boulevard Tarpon Springs, which took about 6 years, being finished in 1995.

The island of Halki has no airport. The nearest island to Halki is Rhodes which can be reached  by boat in ~ 50 minutes. There are daily sea trips from Kamiros Skala / Rhodes to Halki and there are also two routes per week from Piraeus port to Halki.

If you arrive at the island there are local boatmen who offer trips around the island and to other beaches. However most beaches are accessible by land so the municipal minibus can get you anywhere.