Heraklion (Ηράκλειο): the largest city and capital of the Crete island is a modern-industrial city of around 225.000 residents. A city which is always loud and alive, day and night making it one of the popular destinations in Europe. As archaeological highlight Knossos, the modern city is densely populated and traffic choked, at first overwhelming the visitor. However, in recent years, things have begun to change and efforts are being made to bring out the beauty of the city’s rich cultural history.

Strolling along the coastline, the city wall, or down a park can reveal various historical remains of potentially immense interest to the watchful eye. The knowledgeable visitor will be able to trace the past under the urban sprawl of the present. The core of the city is still enclosed and defined by the Venetian wall, which includes seven out-jutting bastions. In the southernmost of these, the Martinengo Bastion, is the grave of Nikos Kazantzakis standing on a windswept hilltop with its moving inscription, “I hope for nothing. I fear nothing. I am free.”

Why travel to Heraklion?

Heraklion is not the most attractive city of Crete, as it was built haphazardly with little planning oversight. But behind this flaw you can discover a vibrant working small metropolis with a great number of attractive features which do much to temper initial impressions. Although there are a number of preserved old buildings and churches, the Old Town has largely disappeared. The harbour (a major cruise and ferry port) boasts Venetian walls and a Venetian fort. Heraklion city is full of students all over Greece, as it has two of the best and biggest universities of the country. This is the main reason that keeps the city full of life at winter time. 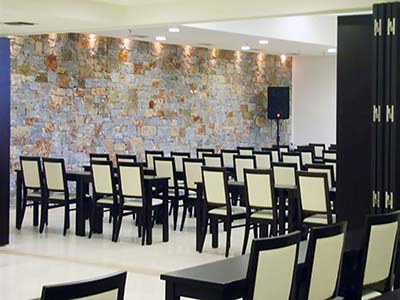 City: Heraklion
Delegates: 220 pax
Petra Hall with its 210 m2 fitted with the latest state of technology in audiovisual and communication equipment, meets all requirements for meetings, receptions and other special events. 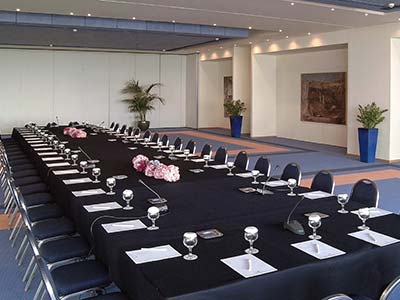 Heraklion is close to the ruins of the palace of Knossos, which in Minoan times was the largest center of population on Crete. Knossos had a port at the site of Heraklion (at Poros – Katsambas neighborhood) from the beginning of Early Minoan period (3500 to 2100 BC). Around 1500 BC, the port was destroyed by a volcanic eruption from nearby island of Santorini which led to a tsunami wave, leveling the region and covering it with ash.

After the fall of the Minoans, Heraklion, as well as the rest of Crete in general, fared poorly, with very little development in the area. Only with the arrival of the Romans did some construction in the area begin, yet especially early into Byzantine times the area was abound with pirates and bandits.

The present city of Heraklion was founded in 824 by the Arabs under Abu Hafs Umar who had been expelled from Al-Andalus by Emir Al-Hakam I and had taken over the island from the Eastern Roman Empire. They built a moat around the city for protection, and named the city ربض الخندق, rabḍ al-ḫandaq (“Castle of the Moat”). It became the capital of the Emirate of Crete The Saracens allowed the port to be used as a safe haven for pirates who operated against Imperial (Byzantine) shipping and raided Imperial territory around the Aegean.

In 960, Byzantine forces under the command of Nikephoros Phokas (Νικηφόρος Φωκάς), later to become Emperor, landed in Crete and attacked the city. After a prolonged siege, the city fell in March 961. The Saracen inhabitants were slaughtered, the city looted and burned to the ground. Soon rebuilt, the town was renamed Χάνδαξ, Chandax, and remained under Byzantine control for the next 243 years.

In 1204, the city was bought by the Republic of Venice as part of a complicated political deal which involved, among other things, the Crusaders of the Fourth Crusade restoring the deposed Eastern Roman Emperor Isaac II Angelus to his throne. The Venetians improved on the ditch of the city by building enormous fortifications, most of which are still in place, including a giant wall, in places up to 40 m thick, with 7 bastions, and a fortress in the harbor. Chandax was renamed Candia and became the seat of the Duke of Candia, and the Venetian administrative district of Crete became known as “Regno di Candia” (Kingdom of Candia). The city retained the name of Candia for centuries and the same name was often used to refer to the whole island of Crete as well. To secure their rule, Venetians began in 1212 to settle families from Venice on Crete. The coexistence of two different cultures and the stimulus of Italian Renaissance led to a flourishing of letters and the arts in Candia and Crete in general, that is today known as the Cretan Renaissance.

During the Cretan War (1645–1669), the Ottomans besieged the city for 21 years, from 1648 to 1669, perhaps the longest siege in history. In its final phase, which lasted for 22 months, 70,000 Turks, 38,000 Cretans and slaves and 29,088 of the city’s Christian defenders perished. The Ottoman army under an Albanian grand vizier, Köprülü Fazıl Ahmed Pasha conquered the city in 1669. Under the Ottomans, the city was known officially as Kandiye (again also applied to the whole island of Crete) but informally in Greek as Megalo Castro (Μεγάλο Κάστρο; “Big Castle”). During the Ottoman period, the harbour silted up, so most shipping shifted to Chania in the west of the island.

In 1898, the autonomous Cretan State was created, under Ottoman suzerainty, with Prince George of Greece as its High Commissioner and under international supervision. During the period of direct occupation of the island by the Great Powers (1898–1908), Candia was part of the British zone. At this time, the city was renamed “Heraklion”, after the Roman port of Heracleum (“Heracles’ city”), whose exact location is unknown.

In 1913, with the rest of Crete, Heraklion was incorporated into the Kingdom of Greece. Heraklion became again capital of Crete in 1971, replacing Chania.

DnD Travel offers you the opportunity to book any vehicle of your choice with a simple e-mail or phone call one day before your arrival at Heraklion. Otherwise we can advise you some means of transport for your convenience  below.

You can use the public city bus network to get around Heraklion, but you have to figure out the line to your destination. Online schedules state the departure time from the start of the route, usually the airport or port, and differ for summer and winter. Almost all buses pass through the center. Buses are numbered according to the destination, and so are different for outbound and return. There are usually no routes or schedules posted at the bus stops.

Tickets can be bought from kiosks and small shops, and from automated machines at select bus stops. They can sometimes be bought on the bus at a higher price. Buses do not stop at bus stops, unless you signal the driver by raising your arm. When you get on the bus, hold the bottom half of your ticket in your right hand. The bus driver will grab the top half (side with number value of ticket) and the two of you will rip it in half.

Locations of taxi ranks include: