Karpathos (Κάρπαθος in Greek) is the second largest of the Greek Dodecanese islands with a history dating back to the Minoan era and settlements going back to the second millennium B.C. Karpathos aims is at tourism, its authentic pure natural beauties, its unique wealth, all enhanced by the hospitality of its residents, its magnificent beaches, its secluded small bays, its imposing mountain peaks and its local inhabitants who dress up in their traditional costumes.

The island is one of the characteristic tourist islands that still keeps all its authenticity. Its natural beauties are superior to those of other islands, especially the areas of Lefkos, Mesohori, Achata, Olympos, etc. Every mountain, mountainside and coast is nothing less than a work of art. The wildness of the landscape blends with the sweetness of nature. Mountains, pine trees, fresh air and sea, make a superb scenery. 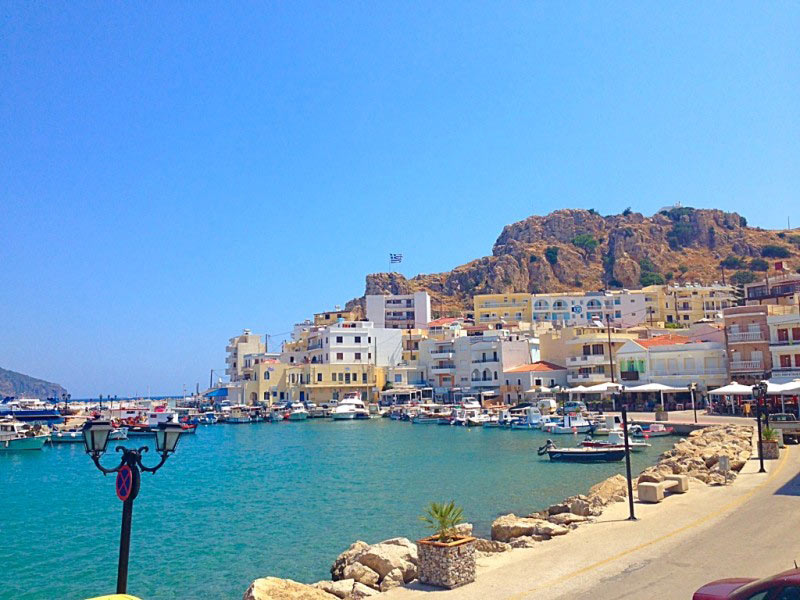 Karpathos island is a great place for many activities such as windsurfing, diving, hiking, long walks, bicycle rides and more. Karpathos mountainous tracks are ideal for hiking, and numerous suggested treks, southern plains and rough cliffs on the north of the part, can be followed by the visitors where they can uncover real hidden treasures. Additionally driving can be a joy in these areas, especially the off-road driving can lead you to places that you never imagined.

Karpathos is rich in local traditions and famous for its festivals. On 10th of August celebrates the Olympus Chrysovalantou Monastery. The Assumption is celebrated throughout the island and have big feasts in Aperi, Diafani in Menetes and Olympus and on 8 September celebrates the Virgin Mary in Mesochori.

Karpathos is a Greek island with picturesque villages, exotic beaches, amazing views and delicious restaurants. There are two ports in this island, one is at northeast of the island in a village called Diafani and the main port and capital at Pigadia at the southeast of the island. The island’s old capital is Aperi village and it is the seat of the Archbishop of Karpathos and Kassos island. There are some remains of a Byzantine cemetery where the Cathedral now stands. Just outside of Aperi towards Volada are the ruins of three medieval castles.

Pigadia is located on a scenic bay with a long beach and next to a rocky hill. This harbor town has a mix of red tiled roofs and apartments with balconies. It offers every facility a visitor may need as well as hotels, rooms to let, taverns and bars. There is also a nice pedestrian boulevard and in the center of Pigadia you can find the newly built archaeological museum of Karpathos which hosts findings from 4,000 BC until the Byzantine period.

Olympos is the most traditional and the most remote settlement of the whole island, transforming it like a museum itself. The village is located at the northern part of the island and until recently it was not accessible by car. Thanks to years of isolation, the traditions in this village are still held in high esteem and residents often wear traditional costumes. Here, it seems as though time stood still. Near the main church of the village is the folk artist’s Vassilis Hadjivassilis Museum.

Diafani is a traditional fishing village close to Olympos. Located on the northern side, Diafani is the second most important port of the island. There are plenty of rooms to stay and eat. It is accessible by road through the villages of Aperi and Spoa. You can also travel to Diafani, daily, by boat from Pigadia. Additionally, there are boat trips to near beaches, even to the inhabited in the summer only by shepherds, islet of Saria. The Information Center of the Protected Areas located in Diafani, aims to inform about the protected area Karpathos – Saria, where resides the Monk Seal Monachus Monachus.

Arkassa is prettily situated on the coast with beautiful views across Kassos island. On the headland are the remains of the ancient capital Arkessia where a Mycenaean acropolis with huge walls stands on a rocky land known as Paleokastro. In the same area there are the ruins of Agia Anastasia , a church with traces of mosaic pavements, Agia Sofia (an early Byzantine church) and the monasteries of Ipapanti.

You can find sacred chapels all over the island, crystal waters on all beaches, traditional food on restaurants, adventurous excursions to mountains, remarkable caves with impressive stalactites and stalagmites, various museums (folklore, agricultural, archaeological) and many more. The most amazing thing of course is the magical sunset, where someone can enjoy it at any slope of the island.

Karpathos is an island full of history and tradition. Τhe inhabitants carefully maintain the customs that are passed through generations and try to protect all the monuments and archaeological sites in such way as they take care of their houses.The history of Karpathos begins from the Neolithic years and is connected to the history of Crete. Most of the findings are traced in the ancient cities of Arkassa, Diafani, Aperi and Mesochori.

There are many artifacts kept in the 2 folklore museums of Karpathos. The Folk Museum of Othos village is housed in the traditional house of Varikas and Aristotle Stavrakis, which is a typical example of a fine Karpathian house of the previous century. The museum was created by the Association of “Work and Joy” and exhibits a rich collection of original folk pieces of Karpathos, such as furniture and items of everyday use. The other folklore museum is at Menetes village where authentic photographs, ornaments, textiles, musical instruments, tools and other items are preserved. There is also a smaller folk collection at Olympos village which keeps traditional costumes, pictures and various objects and items.

The newly-built archaeological museum of Karpathos opened in 2005 and it is situated near the port of Pigadia. The oldest finds date back to 4.000 B.C. being Neolithic arrow peaks of obsidian, stone grinders and a stone ax. The Minoan findings include a bronze bracelet, a stone seal, a pottery wheel, vases and more. There are also Mycenaean exhibits, such as cups, utensils, burial urns and vases. The findings of Roman and Byzantine periods include a relief column, mosaics, gold coins, weights, lamps, etc. The most amazing exhibit is a tomb from Vonies at the area of Arkassa which is still intact.

In Arkassa there is a museum with no specific theme, with a variety of historical, folklore and ecclesiastic exhibits. Historical finds include agricultural tools, utensils, local embroidery and ceramic everyday items from various periods. The folklore collection consists of weaving, traditional furniture, home decorations and paintings. Finally, there are a few ecclesiastic exhibits like icons but also entire parts of paleochristian churches.

In Pyles there is a small museum which contains interesting handmade clay and straw objects, tools and a variety of items used in everyday rural life across the island. Attractions include a traditional windmill, a wine press, a wheat mill, and an old woodstove. It also reveals how some of the local products currently on sale across the island have been produced.

Apart from historical monuments and museums, Karpathos has many unique sacred chapels and monasteries. They are all worthy to visit but some of them are in really good location and have a long time history. These are the church of Agia Kiriaki in Pigadia, Agios Mammas at Menetes, Agios Onoufrios at Olympos, the church of Ipapanti, the church of Kira Panagia, the churches of Dormition of Virgin Mary at Menites and Olympos respectively.

As for getting around the island, there is bus service to Othos, Pyles, Aperi and Lefkos villages. Jeeps, cars and motor bikes are available for hire.
Taxis are also available. A popular trip is a boat excursion to the remote island of Saria. This island is totally uninhabited but has some attractive ruins and beautiful beaches.