Kos (Κως in Greek)  is an island located very close to the coasts of Turkey and it is the second most popular island of Dodecanese after Rhodes. The name Kos probably derives from the daughter of the mythical King Meropas, called Koos. Kos is the birthplace of Hippocrates “the father of medicine” (460-377 B.C) and was already inhabited during Neolithic Period  (5th – 4th millennium B.C).

Due to its large size, Kos keeps a balance in tourism development. As Kos receives many charter flights from abroad, many places around the island are getting really busy in high season. Some places are very organized, while others are almost secluded and away from mass tourism. 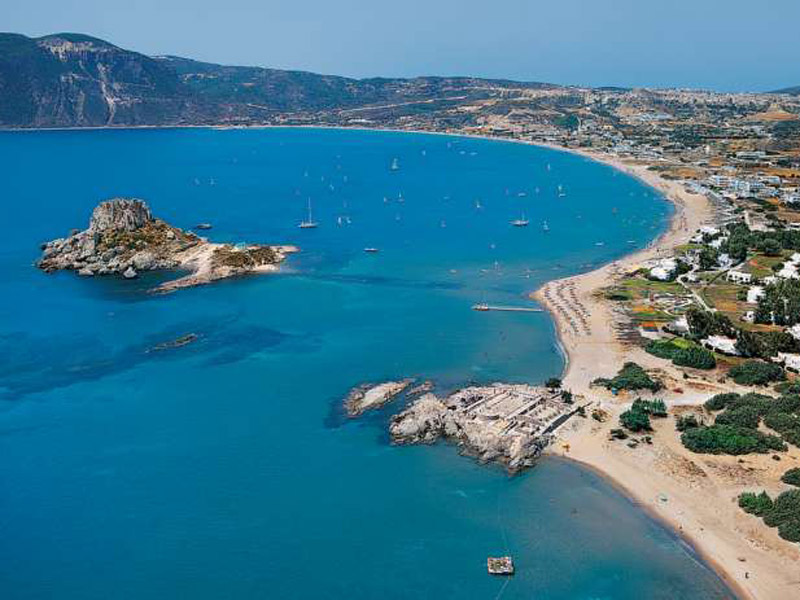 Kos is one of the most popular islands of the Dodecanese and the second largest after Rhodes island. It is surrounded by crystal clear waters with beautiful organised beaches, has many archaeological sites and offers activities for the whole family. There are many things to do in this island, if you are looking for nightlife you can head to Kardamena and if you are looking for a family vacation, Tigaki is a good choice.

For archaeological sightseeing, Asklepeion is reputably the most visited tourist destination in Kos. This archaeological site was built in honor of Hippocrates, an ancient Greek physician also known as “the father of medicine” who cured people and taught the art of healing to his students. Asklepeion is located just a few meters from natural springs and has the remains of the temples of Asclepius and Apollo that was initially destroyed by an earthquake. This sanctuary is rumored as the world’s first hospital.

Kos has many traditional homes to visit, all decorated with furnishings of the previous era. The museums are also very inviting to see such as the House of Antimachia Folklore Museum, a recreation of a typical early-20th c. home. In the summer, you can witness authentic Greek dancing as the dancers-in-training put on traditional costumes and perform at local festivals and events.

A nearly deserted village located on a hillside, Haihoutes (also known as Agios Dimitrios) was abandoned 40 years ago and has become a beautifully eerie ghost village, populated only by crumbling houses. Hiking that hill will lead you to the castle town Palio Pyli, it’s a tough, uphill hike but you’ll be rewarded with an amazing view.

In Kardamena you can find a shop of hand woven goods, a place where old ladies weave clothes and carpets using an ancient machine called argalios. This technique is passed on after generations.

Tourists have the opportunity to do bird watching, as hundreds of flamingos spend the winter in Alyki wetlands. Everyone gathers to watch the spectacular sunset in Zia which is one of  the busiest tourist spots on the island.

Kos Town is a mixture of Venetian and Ottoman architecture with interesting sightseeings, such as a Medieval Castle, an Ancient Agora, a Roman Odeon and of course the famous Asklepieion, an ancient healing center, in short distance from the Town and great place to visit in your Kos holidays. The most tourist spots are located on the southern side of the island, including Kardamena and Kefalos. This is where visitors can find large golden beaches with crystal water.

The island’s beaches are almost all sandy. The beaches in the north side of the island are more affected by winds. Most of the coasts underwent touristic development and have easy access and various services. Some of the most visited beaches are: Nomikou-Barbagianni sandy beach extending from the city of Kos to the surrounding areas. It is an organized beach with umbrellas and deck-chairs, water sports, restaurants and bars. Zourouni sandy beach is an organized beach with umbrellas and deck-chairs, water sports, bars and loud music. Nautical Club beach with fine sand is awarded with the European Union blue flag. Milos beach with fine sand, which is also awarded with European Union blue flag. There is a coastal bar with loud music and frequent concerts.

The ancient Greek physician Hippocrates (460-377 BC) is the father of medicine, was born in Kos island and put a definitive stamp on the whole character of Greek medicine. Only the barest outline of the biography of Hippocrates emerges from the Greek ancient writings. He is called Hippocrates Asclepiades, “descendant of Asclepios,” but whether this descent was by family or merely by his espousing the medical profession is uncertain.

It is said that his teachers in medicine is his father, Heracleides, and Herodicos of Selymbria. Hippocrates was certainly known in Athens, because Plato mentions him twice, on each occasion calling him Asclepiades. It is also clear that the top of his career was during the Peloponnesian War 431-404 B.C. The lack of knowledge concerning Hippocrates may seem strange in view of the great volume of writings attributed to him, the CORPUS HIPPOCRATICUM (Hippocratic Corpus), the first known edition which is from the time of the emperor Hadrian (reigned A.D. 117-138).

It is clear, however, that this body of writings contains material of many different kinds and includes differences in standpoint toward medicine. This disparity was recognized even in ancient times, and Alexandrian scholars differed about the authentic Hippocrates, though none rejected every work. Any notion of the nature of Hippocrates’s medical procedure must be based on pre-Alexandrian texts, that is, on texts dating more closely to Hippocrates’s lifetime and reflecting an untainted direct tradition. Two excellent sources are Plato’s PHAEDRUS (270C-D) and Meno’s account of Hippocrates in his history of medicine. There is sufficient evidence in these works to establish with certainty the main outlines of Hippocratic medicine. Some works in the Hippocratic Corpus were recognized as having been written by persons other than Hippocrates, but acceptance and rejection depended on a number of subjective stances. More modern scholarship has used as its touchstone the genuine doctrine of Hippocrates as found in Plato and Meno.

Kos is a big island compared to the other islands of the Dodecanese complex, therefore travelers can explore more places under the Greek sun and have more experiences at their excursions.

The land excursions include many highlights for discovering. Coaches drive to the best places of interest all the day, covering all the island’s area and villages. For example an full island excursion may start from the port or the center and the destinations can be villages such as Asklipion, Zia, Kardamena or Antimahia, passing through picturesque landscapes, a winery and ancient monuments.

If you already explored the whole island you can start participating in excursions by sea. As many of the Greek islands offer daily trips to Turkey, Kos favorite destination by sea is Bodrum (Alikarnassos) which is only 45 minutes away.