Tilos (Τήλος in Greek) is a small and quiet island in the Dodecanese. An island with rough, mountainous and turfy land, with hills and plains where four hundred species of flowers and herbs vegetate, inhabited by numerous species of rare birds (Bonelli’s eagle, hawks, herons, nightingales, goldfinches, bee-eaters etc). It has picturesque villages and charming beaches.

The island extends over a surface of 63 km², its coastline is 63 km long and it has 500 inhabitants. This is not an island for everyone, but it is a destination for people looking for peace and quiet, rugged beauty, beautiful sea views, excellent walks, and a simple lifestyle. 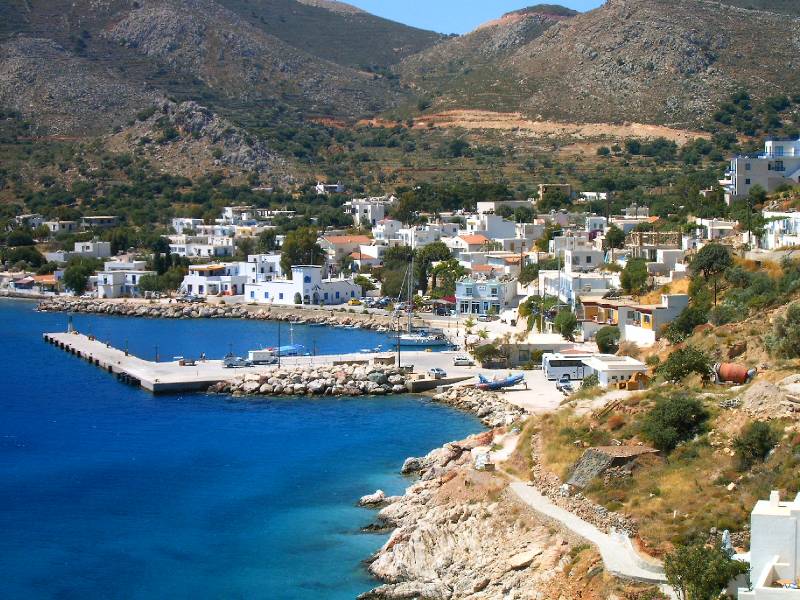 Tilos is a place you can go to relax and get away from from the everyday routine. Just because it’s quiet, though, doesn’t mean there’s nothing to do. Hike through the green hills, go swimming / relaxing at the beach and enjoy some delicious food are the basic things one should do at this little island. From historical sites to cultural attractions, exploration in Tilos is fun, entertaining and educating.

You can enjoy a hike along the ancient paths that are graced by dozens of small churches with ancient frescoes. Its the favorite place for bird watchers as the sky is filled with over than 100 species of birds, some of them are rare and come at selective periods. In addition, tourists can accompany the fishermen and get some advice on how to catch a fish or do snorkeling if they desire. For the more athletic types, there are organised activities for sea sports such as windsurfing.

Livadia is the island’s port and the largest settlement, bearing modern, yet small hotel units as well as rooms to let. If you want to swim, you should head to Erystos coast, which has a sand beach almost 2 km long. It’s worth visiting Mikro Chorio (translated Small Village in Greek language), which was deserted by the inhabitants in 1970. There are also remnants of a castle, deserted stone-made houses, paved streets, Byzantine churches (Agia Zoni, Sotiras etc) with a unique aura housing very old frescoes. It is located 2 km south east away from Megalo Chorio, which is the capital of the island. It stands out thanks to the simple, island architecture used to construct the stone-made houses. You will enjoy a walk through the narrow alleys. On the top of the hill, there is a medieval fortress where there are some remaining relics of the Hellenistic acropolis and the church of Archangel Michael, built on the location of the ancient Tilos.

Its worth visiting the Charkadio Cave , where the remains of dwarf elephants have been discovered (1971). Above the cave, there is the castle of Mesaria (1366), with ruins of settlements and Byzantine churches. The Paleontology Collection is where the bones of dwarf-elephants, drafts, photographs and other informative material regarding the excavations performed in the cave Charkadio are exposed. The seaside village Agios Antonios (Saint Antony), a harbor for fishing and trip boats and The Byzantine Monastery of Agios Panteleimonas (15th century), located in a verdant area, full of giant cypresses and plane-trees are great places to visit too. In Agios Panteleimonas there is held a 3 day celebration in July and in 15th of August at Mikro Horio (a deserted complex of houses) visitors are offered great amounts of food and wine to celebrate the Assumption of Mary.

The island was first inhabited in the early Neolithic period 8000-7000 b.c. as it is shown at the findings in the cave of Charcadio. There are proof that both Minoans and the Mycenaeans have settled on the island. From excavations carried out Pelagian walls were also found. However the island’s most important period was the 7th century BC when Tilians together with Lindians settled in Sicily and built the well-known city of Gelas. The tyrants Gelon and Ieron were from Tilos. The island flourished during the classical era by having its own coinage and being famous for clothing and perfumes. In Byzantine times, together with Nisiros, Kos and Samos it constituted the Samos Issue. The Knights of St. John who either reconstructed or built three of the island’s castles inhabited it. At this time ecclesiastical wall painting was developed. In 1522 the Turks occupied it until 1948 when it was reunited with Greece who conquered the island.

The Castle is where the acropolis of the ancient city used to be and stood the sanctuary of Pythios Apollo and Pallas Athina. In the ruins of this sanctuary there is  the church of Archangel Michael with wall paintings from the 16th century AD which stand until our days. The best time to visit the place is in the afternoon where the view and the sunset are unique.

This is also the place where the last elephants of Europe lived: The dwarf-elephants appeared in the island 45,000 years ago and disappeared 4,000 years ago. The whole island constitutes a vast ecological park and is protected by international treaties. In ancient times, Tilos was famous for its herbs and became really prosperous during the classic period.

It can be reached by ferry from Symi, Leros and Patmos islands plus the port of Piraeus but usually the travelers prefer to fly to Rhodes or Kos as the trip is shorter (only a couple of hours).
Toggle Sliding Bar Area